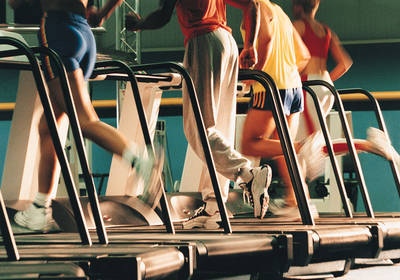 I want to talk about jogging and running, and the differences between outdoor training and treadmills.

When running outdoors their are environmental factors that come into play that affect exercise intensity. The obvious ones are wind resistance; you need to push your body through the air resistance when moving forward; and terrain variation, as no path is perfectly flat. On a treadmill, your body is not moving forward, so wind resistance is removed and need not be overcome, and the surface you’re running on is essentially flat. This is enough to cause treadmills to burn 5-10% fewer calories than outdoor running, though this can be compensated for by increasing the elevation 1°, while maintaining the same speed.

There are less obvious factors, however. For most runners, the form factor of the treadmill will alter the gate of the runner, forcing a more upright stance and altering the foot strike pattern, than would be optimal outdoors. An upright stance will change the way impact shock is distributed. This is compensated for by the treadmill with built in cushioning, but the upright posture can become habit and transfer into outdoor running where it can lead to a variety of injuries including shin splints, ankle, knee, hip and back pain.

I suspect, however, that even the 5-10% under-estimates the negative for treadmills. Many websites report that treadmills are essentially the same as outdoor running minus those environmental factors, but I disagree. I argue that the treadmill, being motorized, is inherently different than the proverbial hamster in a spinning wheel; the example most sited to explain why treadmills are mostly the same as outdoor running. The spinning wheel is not motorized, and the hamster must supply the energy to move it, even though the hamster is running in place. Another example is a person running on the deck of a cruise ship at sea. The cruise ship is moving, propelling the runner along regardless of their effort.

Both of these examples are erroneous. In the case of the hamster, the wheel will not move if the hamster doesn’t push it along, so while the hamster might remain stationary, it is pushing the wheel. The cruise ship example is even worse. A runner on deck would still be propelling their bodies forward, pushing through their hamstrings and glutes. On a treadmill, which is motorized, the treadmill is actually pushing your legs backward, reducing the use of your muscles to stabilization only, and not propulsion, as well.

Treadmills do have a place. Setting a fast pace can compensate for complacency. Inclement weather is no factor, and time of day is less an issue. Also, when you’re in a gym, you will exercise. All bets are off once you leave the premises.

My conclusion: when circumstances permit, walk jog, and run outdoors to maximize your exercise benefit. Leave the treadmill alone when possible. 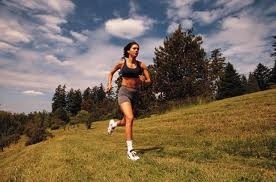 2 thoughts on “Running: Inside and Out”

This site uses Akismet to reduce spam. Learn how your comment data is processed.